Today we take a moment to reflect on how our cinemas thought of outer space during the beginning of the Space Race era. Please cast your vote and be sure to leave your favorite Sci-Fi movie title in the comments section. We’re choosing one lucky submission to receive a very cool ‘Classic Hollywood’ Sci-Fi Movie Poster book.

In the 1950’s and 60’s, the Cold War paranoia and the fear of complete annihilation gave rise to an unparalleled wave of alien invasion movies and apocalyptic space adventures. With a new age of technology and research, filmmakers grew increasingly interested in the cinematic interpretation of the extra-terrestrial and the boundaries of science. For our list of the top classic sci-fi movies from the 50’s and 60’s, we have taken into account films that stretched the boundaries of science and the cinematic art form.

Timmie (Richard Eyer), a mischievous 10-year-old boy, is plopped in front of a supercomputer by his scientist father, Dr. Tom (Philip Abbott). The computer, however, secretly gives Timmie super-intelligence and he’s soon able to reanimate a robot named Robbie.

A true science-fiction horror film, The Invisible Boy is a mixture of lighthearted playfulness and menacing evil. Military Satellite! Super Computers! Robots! It has everything! 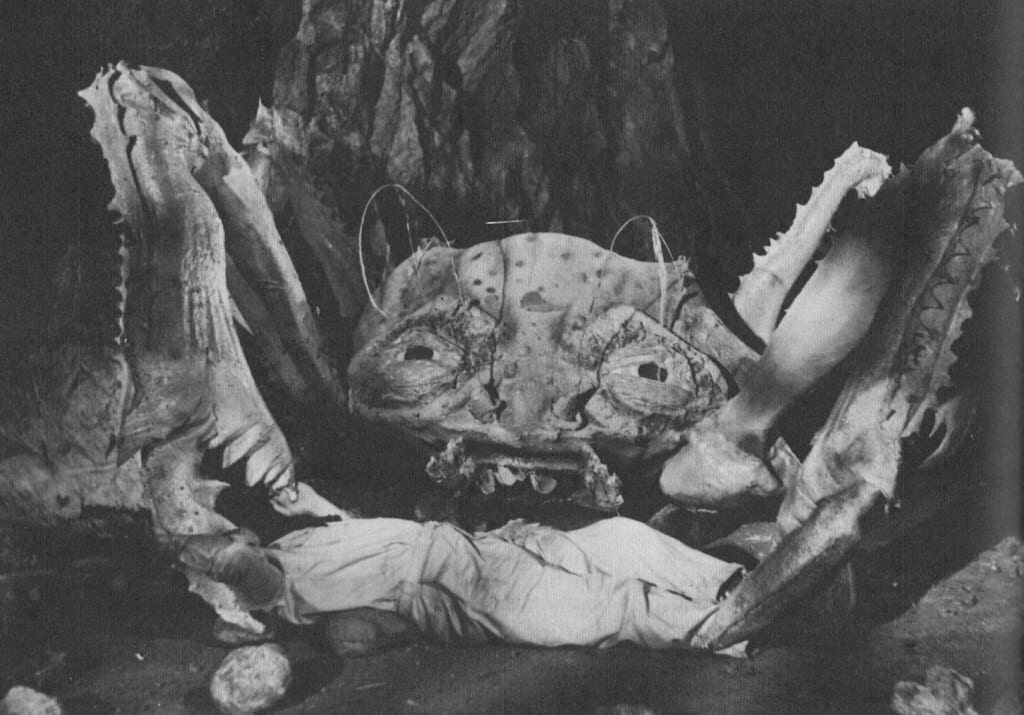 A team of scientists land on a tropical island to study the effects of radiation fallout. When the island begins to break off into the ocean, giant crustaceans begin calculated attacks on the humans, forcing them to fight for their lives. Director Corman demanded suspense or action in every scene of the movie, and writer Charles B. Griffith ably supplied it. Now, it was typical for these sort of giant monsters to eat people, suck them dry, whatever. But in Chuck’s scenario they also absorb the knowledge of the victim. Every meal raises the monsters IQ a few more points. In essence, each victim becomes part of a collective whole, a hive mentality, working for the survival of the crab. Because of this there are moments when Attack Of The Crab Monsters takes on the characteristics of an old fashioned ghost story

This was one of a group of films for which Allied Artists prepared a modified version for U.S. 16mm television syndication prints. These prints started off with a lengthy clip from the movie and added an introductory crawl. This extra padding brought the film’s running time up to approximately 70 minutes.

‘Attack of The Crab Monsters’ (1957) US One Sheet Movie Poster in stock. 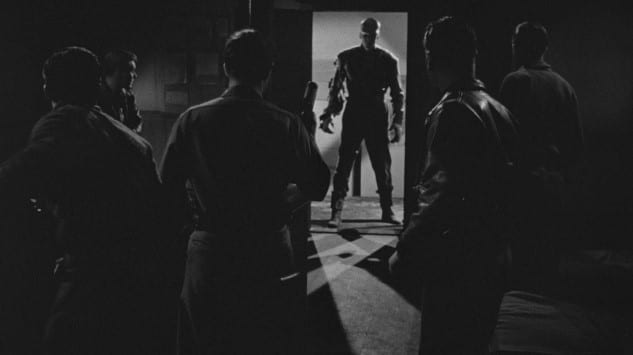 One of the great sci-fi classics, a Hawks film in all but director credit (he produced, planned the film, supervised the shooting). The gradual build-up of tension, as a lonely group of scientists in the Antarctic discover a flying saucer and its deadly occupant, is quite superb; while The Thing itself (played by Arness) is shown sufficiently little to create real menace.

Hawks rejects out of hand the idea that the alien might be worth trying to understand or communicate with; in fact, the scientist who tries to do this is made to seem feeble and even inhuman, so that the overall message of The Thing emerges as distinctly hawkish. Reactionary or not, though, it’s still a masterpiece. 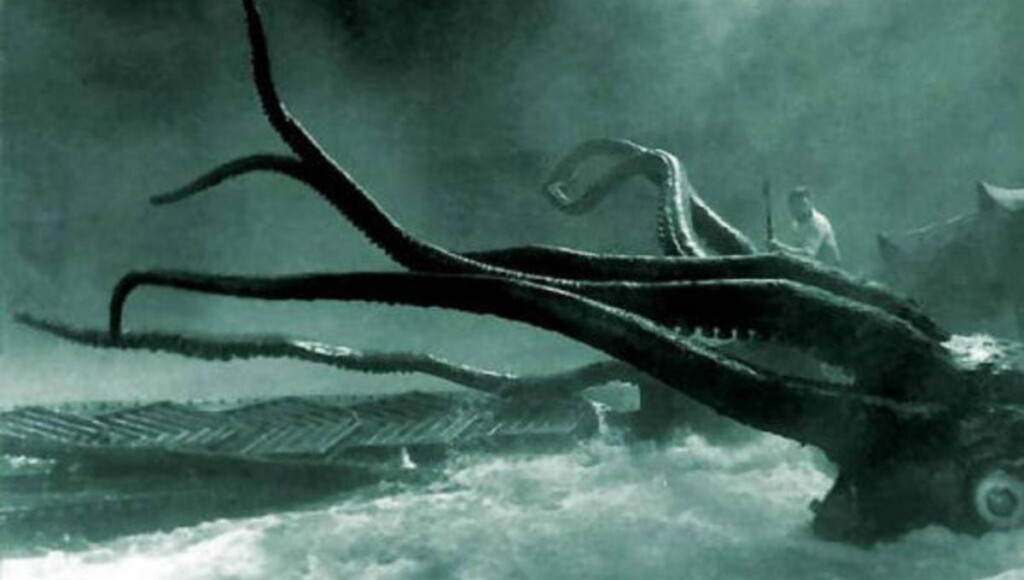 Adapted from a Jules Verne classic, ‘20,000 Leagues Under the Sea’ is a deft infusion of technological visuals and aesthetics, giving birth to what is known as the “steampunk” genre of filmmaking. Directed by Richard Fleischer, this 1954 flick was a fresh departure from the sci-fi films of that time which explored space.

A recipient of two Academy Awards, ‘20,000 Leagues Under the Sea’ is still remembered for its giant squid and English actor James Mason’s performance as the infectious anti-hero Captain Nemo. 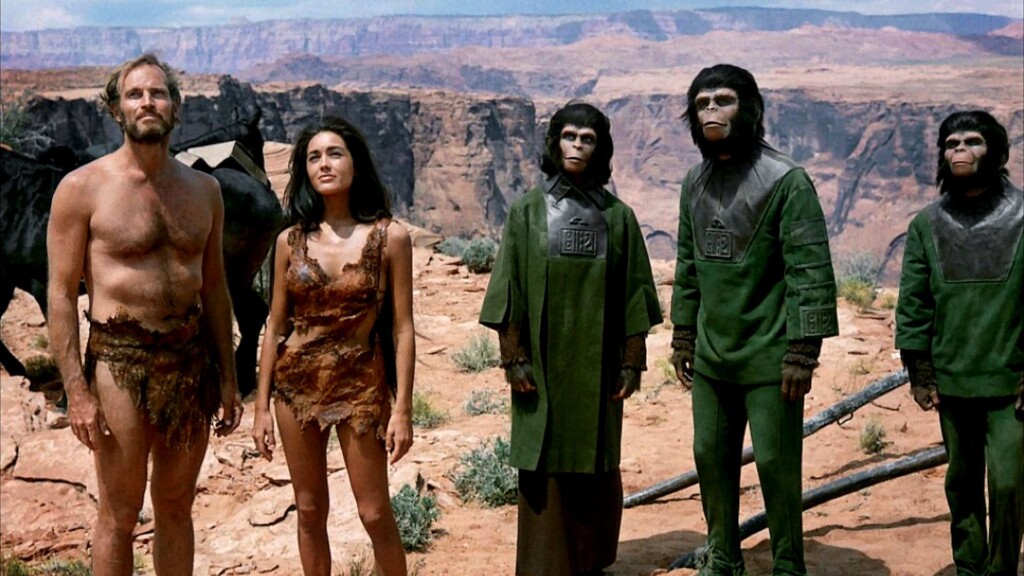 Based on the French novel ‘La Planète des Singes’ by Pierre Boulle, published in 1963, ‘Planet of the Apes’, set in the distant future, follows an astronaut crew who crash-lands on a strange planet.

While the planet seems desolate at first, the surviving crew members learn that it is inhabited by apes have evolved into creatures with human-like intelligence and speech. Seeking attention with its then ground-breaking prosthetic make-up and resonated background score, ‘Planted of the Apes’ kicked off the much celebrated (barring Tim Burton’s 2001 blunder) film series. 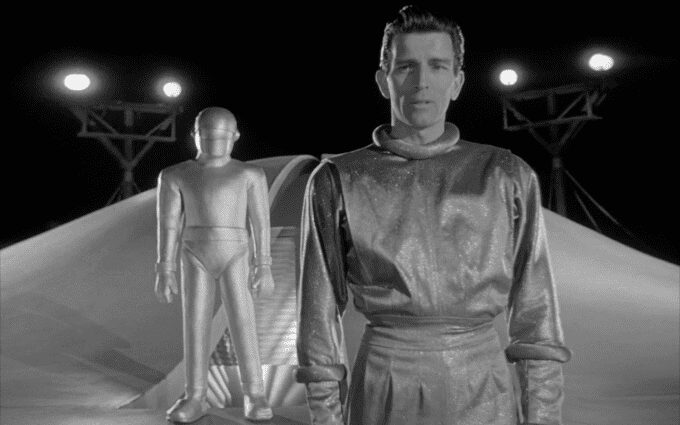 Directed by Robert Wise, ‘The Day the Earth Stood Still’ black-and-white science fiction film about a humanoid alien visitor named Klaatu who comes to Earth, accompanied by a powerful eight-foot-tall robot, Gort, to deliver an important message that will affect the entire human race.

Praised for its documentary-style filmmaking and is often cited to have made a change in how science fiction was perceived back then. A commentary on social harmony and world peace, ‘The Day the Earth Stood Still’ has cemented itself as one of the most icon sci-fi movies of all time. 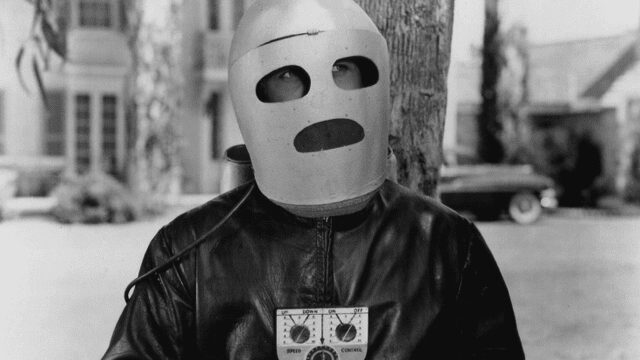 Spawning every spaceship you ever played with. The Lydecker Brothers’ miniature planets and spacecraft, an array of colorful and relatively believable life-size props, and the trademark Republic “rocketman” effect give the Cody series a lot more visual strength than most other early attempts at screen sci-fi. An actual rocket suit in action!

There are enough interesting ideas and effects scattered throughout the Cody series–particularly in episodes five through eight–to make it worth watching. The series also has enough good moments to make one wish that Republic had done more with it. Had its leading man been stronger, its budget a little higher, or its characters a little more developed, Cody might even have proved a blockbuster success in it’s time. 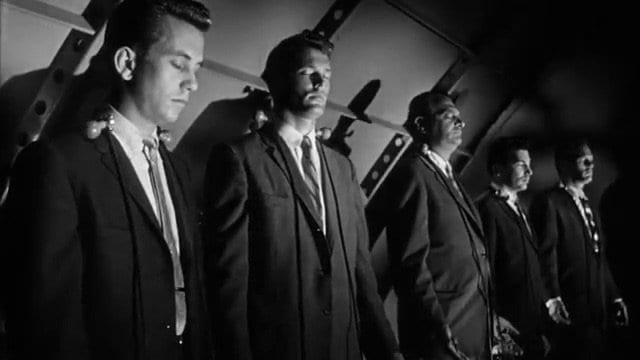 ‘I Married A Monster From Outer Space‘ (1958) US Three Sheet Movie Poster in stock! 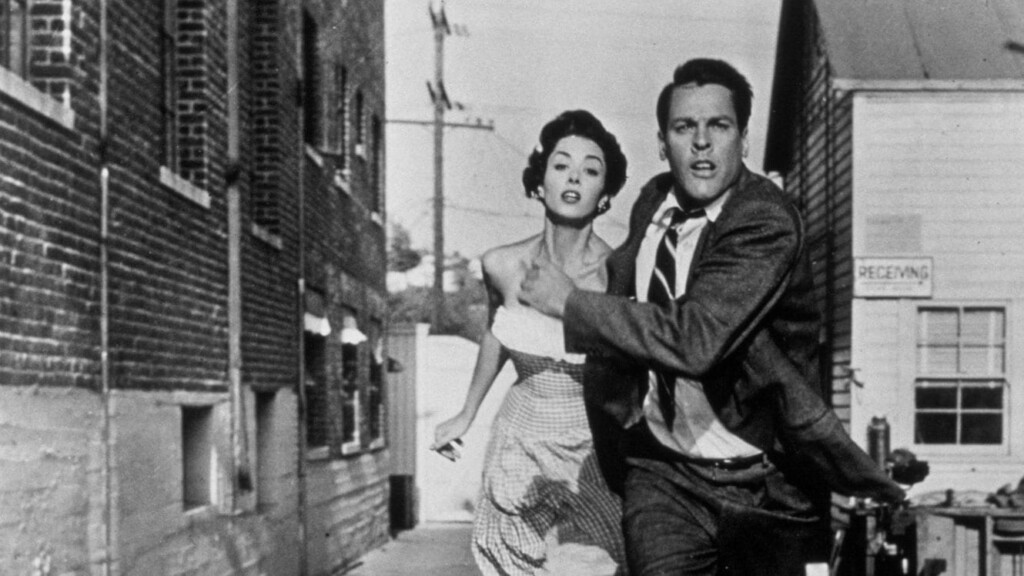 Directed by Don Siegel, ‘Invasion of the Body Snatchers’ is the story of a small-town doctor, essayed by Kevin McCarthy, who learns that the human race of his community will be replaced by emotionless alien duplicates.

Adapted from Jack Finney’s novel of the same name, published in 1955, was an instant hit was hailed by many as one of the most accurate science movies.

‘Invasion of The Body Snatchers‘ (r.1978) US One Stop Movie Poster in stock! 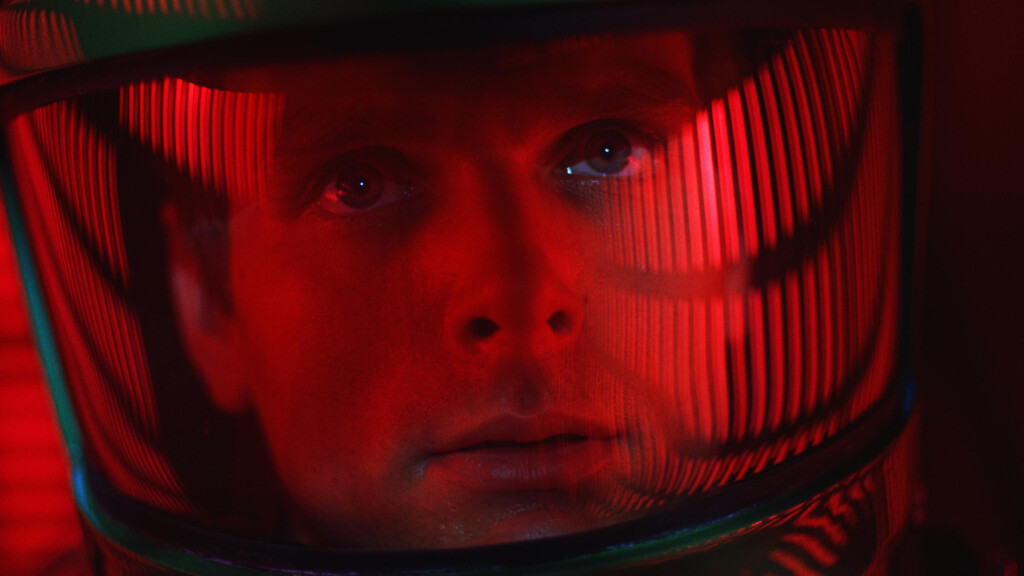 Keir Dullea played astronaut David Bowman in Stanley Kubrick’s 1968 film, 2001: A Space Odyssey.An enigma of a film, ‘2001: a Space Odyssey’ follows a voyage to Jupiter with the sentient computer HAL after the discovery of a mysterious black monolith affecting human evolution, deals with themes of existentialism, human evolution, technology, artificial intelligence, and the existence of extra-terrestrial life.

Directed by the eccentric Stanley Kubrick, the film is a terrifying yet an intoxicating watch. Adapted from British author Arthur C. Clarke’s short story’ The Sentinel’ (1951), who also assisted in writing the screenplay, the film utilises the ambiguity of the extra-terrestrial life form.

While the other movies on this list heavily rely on the terror of the spaceship, this 1968 wonder develops the horror without actually showing it onscreen.

What makes this film such a tremendous watch is its scientific accuracy, a feat still unmatched by many. Adding to its grandeur, the employment of classical music and minimalist dialogues elevated the discreet horror and opacity.

Like any visionary masterpiece, the film wasn’t a critical success at the time of its release. However, with the passage of time, ‘2001: A Space Odyssey’ has seasoned to be one of the greatest science-fiction films of all time.

Buying From Auction Houses, What You Need to Know

When major auction houses like Christie's or Sotheby's hold an auction featuring movie posters, they usually attract some of the... read more

There is a good reason why this is the NUMBER ONE RANKED GUIDE in the Movie Memorabilia category on eBay.... read more

I Have Some Old Movie Posters and I’m Thinking of Selling Them: What Can I Expect?

You have a collection of posters and you'd like to find out more about them and possibly sell them and... read more

You do not need to be a professional photographer, nor do you need any expensive special equipment to get great... read more

SAN FRANCISCO, Jan. 28 — A year ago Jacqui Rogers, a retiree in southern Oregon who dabbles in vintage costume... read more

One of the "dirty little secrets" in the movie poster business are Re-Strikes. They are posters that were printed by... read more

Linen backing can dramatically improve the overall appearance of a poster and it can substantially increase its value. It is... read more

The Advance One Sheet for PULP FICTION was recalled due to a dispute with Lucky Strike (a Lucky Strike cigarette... read more

The value of a movie poster depends on 6 primary factors; its originality, its rarity, demand, its overall condition, the... read more

All About Fakes and Reprints

Movie posters can be found at flea markets, garage sales, local poster shops, and especially on the internet and on... read more

Instant Cash For Your Posters!