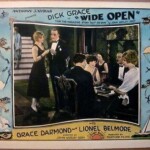 THANKS FOR CHECKING OUT OUR FILM NOIR THURSDAY LISTINGS!


Condition: Light border & corner tip wear, no pinholes, unbelievably awesome animated aviation, daredevil artwork featuring bi-planes, parachuting & men falling from an airplane down to a sailboat, a man jumping across cliffs on a motorcycle & men dangling from ladders beneath a bi-plane while another jumps to a ladder dangling from a biplane as his car goes off a cliff!  Truly spectacular & features incredibly rich hand-tinted color!  Displays overall in Very Fine Condition. NOTE: thought to be among the many lost films of this era, a copy of WIDE OPEN was located in 2004 and now belongs in a private collection.


Please refer to the attached image and enlarge for a detailed view of this exceedingly rare original 1927 Lobby Card for, WIDE OPEN.  Bid with confidence as we offer a 100% money back guarantee on all of our items!

And Don’t Forget, Always Feel Free To Make An Offer On Any Of Our Items!