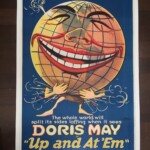 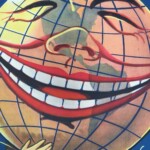 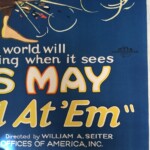 Up and At ‘Em – Doris May (1922) US One Sheet SILENT Movie Poster LB Up and at ‘Em is a 1922 American comedy romance silent film directed by William A. Seiter, written by Eve Unsell with a story by Lewis Milestone and William A. Seiter, and starring Doris May, Hallam Cooley, and J. Herbert Frank. The film had theatrical release August 16, 1922. Initial release: August 16, 1922
Director: William A. Seiter
Production company: Film Booking Offices of America
Screenplay: Eve Unsell
Story by: William A. Seiter, Lewis Milestone Condition: EXC Please refer to the attached image for a detailed view and condition of this original vintage poster. With AAA Vintage Posters your purchase is backed by our 100% Money Back Satisfaction Guarantee!