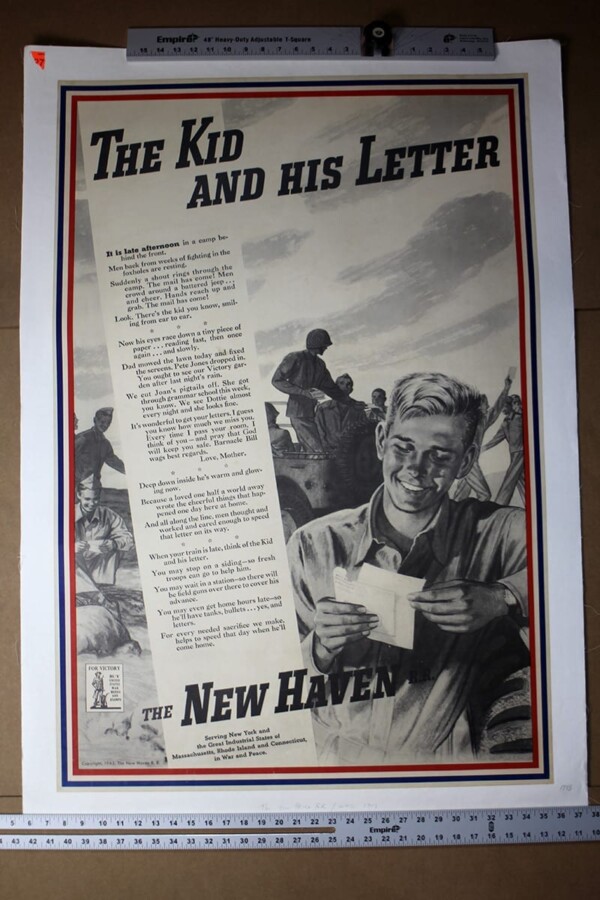 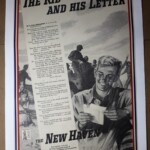 Description:
This print advertisement produced by the New Haven Railroad in 1943 was published in an effort to inspire the public to write to military service members during World War II. The large background image shows a young soldier delightedly reading a V-Mail letter while mail is distributed to his comrades around him. The text tells of the troop’s joy at the prospect of mail call, gives an example of a letter from a loved one and describes the happiness that the letter brings. It also reminds of the effort that went into delivering the letter and urges the reader to remember that the sacrifices they make in their daily rail journeys are helping that young boy at the front.

Advertisements such as this were encouraged by the government and the various wartime agencies as it was believed that regular mail from home was essential for morale. Mainly aimed at women through the medium of magazines, the advertisements tended to encourage the regular writing of short letters. Many were designed specifically to encourage the use of the space-saving V-Mail stationery. Participation in these campaigns was popular among companies as it kept their name in the public eye at a time when producing consumer goods was secondary to providing materials for the war. Crucially, it allowed them to support the war while promoting their own products.