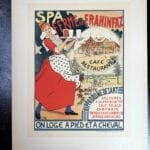 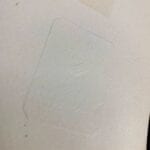 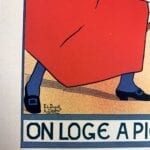 Les Maitres de l’Affiche (The Masters of the Poster) is one of the most prestigious and influential art publications in history. Its 256 color plates from the turn of the century were issued as separate numbered sheets measuring 15 5/8 x 11 1/2 inches every month for 60 consecutive months. From December 1895 through November 1900, subscribers received a wrapper containing four consecutively numbered poster lithographic works. On 16 occasions, the monthly wrapper also contained a bonus plate, not a poster reproduction, but a specially created art lithograph. Jules Cheret, artistic director of Imprimerie Chaix and father of the modern poster, emerged with the majority of the plates, one of every 4 issued per month, and seven of the 16 bonus plates. Of the 97 artists represented in Les Maitres de l’Affiche, some were preeminent painters and printmakers at various stages of their careers, Toulouse-Lautrec and Bonnard among them. There were also those artists whose names say “poster”, the pioneers of the new medium such as Cheret himself, Mucha, Steinlen, the Beggarstaffs, Grasset, and Parrish. Issued as numbered plates in the series Le Maîtres de l’Affiche, bearing the blindstamp of the program (Lugt 1777c) in the sheet lower right. Published by Jules Chéret; printed at Impremiere Chaix (Atelier Chéret), Paris. Condition: VG/EXC – minor foxing Please refer to the attached image for a detailed view and condition of this original vintage poster. With AAA Vintage Posters your purchase is backed by our 100% Money Back Satisfaction Guarantee!