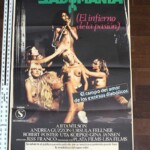 Sadomania ? H?lle der Lust is a 1981 German-Spanish women in prison film directed by Jes?s Franco, starring Ajita Wilson. It was also released as Hellhole Women, Prisoners of the Flesh and Sadomania: The Hell of Passion. Banned in the UJ upon release.

A couple of newlyweds, Olga and Michael, are traveling along the desert and accidentally trespass on the property of Magda Urtado (Ajita Wilson), who is the director of “Sadomania”, a boot camp of sorts, where the women are treated as slaves and are half naked at all times. Magda keeps Olga in captivity while Michael is free to go, but later on in the film he plans an escape for Olga. She goes to work with the other girls out in the hot desert, and the rest of the film is a series of subplots, including one in which a few of the workers are sent out to be hookers, one where a worker participates in a deadly game of cat-and-mouse, and one where the impotent Governor (Antonio Mayans, billed as Robert Foster) buys a couple of the workers to help him perform. There is also a scene where the Governor is finally able to have sex with his wife, but only while watching one of the workers being raped by a dog. Director Jess Franco also stars in the movie as an obviously gay man.
Please refer to the attached image for a detailed view and condition of this original vintage poster. With AAA Vintage Posters your purchase is backed by our 100% Money Back Satisfaction Guarantee!