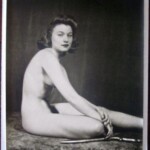 VINTAGE ALFRED CHENEY JOHNSTON NUDE PHOTOGRAPH OF LUD GETTER! MODERN NUDE RARE!!Vintage Alfred Cheney Johnston photograph featuring Lud Getter (10 1/4″ x 13″) Alfred Cheney Johnston (April 8, 1885 April 17, 1971) was a New York City-based photographer known for his portraits of Ziegfeld Follies showgirls as well as of actors and actresses from the worlds of stage and film. In approximately 1917, Johnston was hired by famed New York City live-theater showman and producer Florenz Ziegfeld as a contracted photographer, and was affiliated with the Ziegfeld Follies for the next fifteen years or so (he also maintained his own highly successful personal commercial photo studio at various locations around New York City as well, photographing everything from aspiring actresses and society matrons to a wide range of upscale retail commercial productsmostly men’s and women’s fashionsfor magazine ads). He photographed several hundred actresses and showgirls (mainly in New York City, and whether they were part of the Follies or not) during that time period. This photograph is overall in Very Good to Fine Condition. Please refer to the accompanying image for a detailed view of this original photograph.