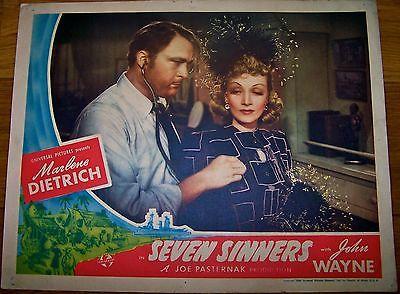 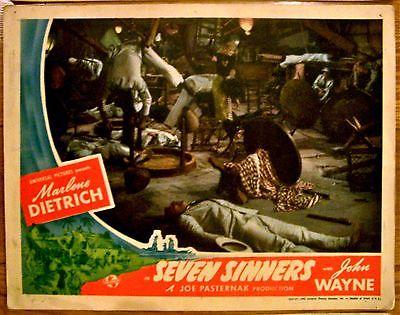 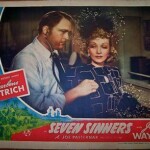 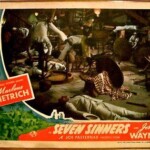 Two Original and rare 1940 Vintage Lobby Cards (11″ x 14″) for the gambling, saloon brawling romantic comedy, SEVEN SINNERS, starring Marlene Dietrich, John Wayne, Albert Dekker, Broderick Crawford, Mischa Auer, Billy Gilbert, Anna Lee, Samuel S. Hinds, Oscar Homolka, and Reginald Denny. These original and scarce Lobby Cards for SEVEN SINNERS depict the Seven Sinners Saloon after a brouhaha likely started in a fight over Marlene Dietrich for trouble surely follows wherever she goes, and the second features a fantastic close-up of Dietrich.  Both of these SEVEN SINNERS Lobby Cards have many pin-holes, edgewear and small corner folds.  And while they could use a little cleaning up, nothing takes away from these two terrific and hard-to-find Lobby Cards from SEVEN SINNERS which are Good Very Good Condition.  Please refer to the attached images and enlarge for a detailed view of these two fun and scarce Original Lobby Cards for the Marlene Dietrich and John Wayne romantic comedy, SEVEN SINNERS.  We will be listing many posters this weekend so keep checking back for new additions.