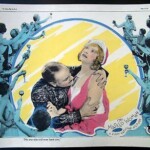 THE MASKED WOMAN (Columbia, 1927)
Original (and pretty darn cool) 1927 vintage Lobby Card (11″x14″) for Silvano Balboni’s melodrama, THE MASKED WOMAN, starring Anna Q. Nilsson, Holbrook Blinn, Ruth Roland, Charles Murray, and Einar Hanson.  This romantic tale concerns a woman (Nilsson) who is wooed in Paris by a rich Turk who is determined to add her to his harem, but she refuses, which is appropriate since she is married.  Well, in his zeal to sully and humiliate her, the Turk leaves Nilsson a fortune in an effort to insinuate that she slept with him and is a floozy.  Well, the kooky Turk didn’t depend on Nilsson’s husband to believe her when she denied any romantic liaison, but he does.  And the two create a fund for an orphanage with her inheritance!  This super cool Lobby Card displays a pinhole in each corner, some border smudges, funtastic artwork of the lecherous Turk as he forces himself on the obviously disinterested Nilsson, and is overall in Fine Condition.  Please refer to the attached image and enlarge for a detailed view of this fun Lobby Card for THE MASKED WOMAN.  We will be listing many posters this week & weekend so keep checking back for new additions.

Also don’t forget to check out our other items at our second store here:

Feel free to contact me if interested and want more pics of this or any item.   And don’t let our low feedback rating give you pause, AAAVintagePosters is and has been our Ebay store and we have 100% Positive Feedback but we will begin transferring over items to our new Ebay Store AAAVintageMoviePosters and adding new items including great titles starring John Wayne, Buck Jones, Orson Welles, Karloff, Steve McQueen, Humphrey Bogart, Marlene Dietrich, Clint Eastwood, Bette Davis, Horror, Film Noir, Western, Beach and Bikini, and Jungle Movie Posters.  Thanks for looking and Good Luck!