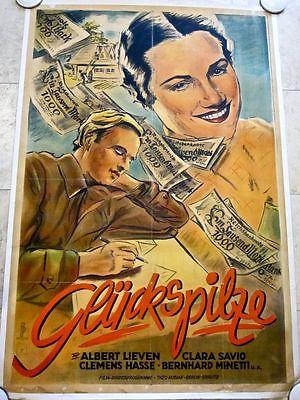 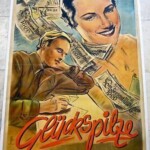 
Condition:    Linen-backed.  This poster was put on linen in the ‘European Style’ meaning any condition issues were not addressed and no restoration was done to this item.  Fold-wear and two spots of paper-loss at right and left of top border, pinholes at top and bottom border and staining at bottom border, rich color and wonderfully charming artwork (with artist’s signature at top right) which defies the current political climate as Hitler was rising to power. I do not know if this was a re-release or not as there is a stamp bearing an eagle atop a swastika and the date 10 Jan 1940 at the bottom left border near the “G” in the title.  Overall displays in Good Condition.   This poster would respond well if one chose to have it’s fold lines and other border issues touched up.


Please refer to the attached image and enlarge for a detailed view of this extremely rare, Weimar Republic era Pre-WWII original Country-of-Origin German poster for the Albert Lieven 1935 film, GLUCKSPIELZE aka THE LUCKY ONES.


And Don’t Forget, Always Feel Free To Make An Offer On Any Of Our Items!