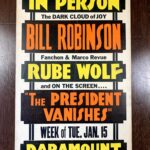 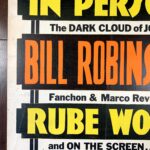 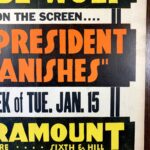 Bill Bogangles early poster Poster for 1935 live performance by Bill Robinson, with Rube Wolff conducting the band, organized by Fanchon & Marco Revue with a screening of the film ‘The President Vanishes’.

Bill Robinson, nicknamed Bojangles (born Luther Robinson; May 25, 1878 – November 25, 1949) was an American tap dancer, actor, and singer, the best known and the most highly paid Black American entertainer in America during the first half of the 20th century. His long career mirrored changes in American entertainment tastes and technology. His career began in the age of minstrel shows and moved to vaudeville, Broadway theatre, the recording industry, Hollywood films, radio, and television.