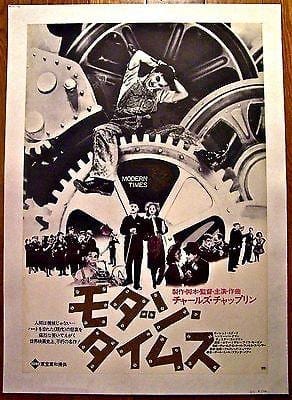 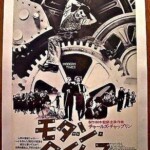 
“He stands alone as the greatest entertainer of modern times! No one on earth can make you laugh as heartily or touch your heart as deeply… the whole world laughs, cries and thrills to his priceless genius!”


Original linen-backed R72 Vintage re-release Japanese poster (28.5″ x 20″) for the 1936 Charlie Chaplin classic, MODERN TIMES, about the struggle to adapt to changes in industry and society using an assembly line as the metaphor for losing one’s humanity and individuality, starring Charlie Chaplin, Paulette Goddard, Henry Bergman, Tiny Sandford, and Chester Conklin.  This original linen-backed R72 Japanese poster for MODERN TIMES, has fold line touch-ups but was formerly only tri-folded, has a very well-composed and attractive art design featuring memorable scenes from the film and is overall in Fine Condition on linen.  Please refer to the attached image and enlarge for a detailed view of this fun, linen-backed R72 Japanese poster for the Charlie Chaplin classic MODERN TIMES.  We will be listing many posters this weekend so keep checking back for new additions.