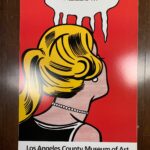 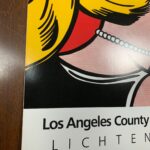 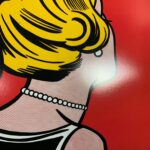 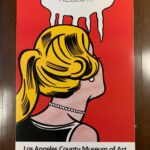 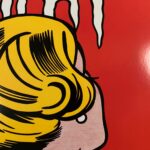 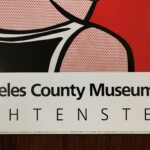 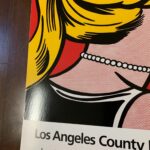 The back of a blonde woman’s head faces this canvas; the figure utters a “hello” that seems to trail off. Rendered in a style familiar even to those who didn’t interface with art movements that circulated during this time, this painting by Roy Lichtenstein represents the Pop artist’s early work.

In the beginning of the 1960s, Lichtenstein borrowed strategies from mass media—newspapers, comic strips, advertisement, even television—to use them in his works. For Cold Shoulder, Lichtenstein employed only a handful of colors—red, yellow, black, white—and thick, hard-edged lines to produce a relatively straightforward composition that is both dramatic and humorous. The artist re-created by hand Ben-Day dots (a printing process in which many dots are clustered within a space to create an illusion of a solid form) to give a fleshy color to the figure’s head and arm. Many Pop artists of the time, Lichtenstein included, deliberately appropriated mechanized ways of image making, a maneuver that was a departure from the Abstract Expressionist movement of first half of the 20th century. Rather than create images that expressed the media in which they were rendered, Lichtenstein instead made works that existed in the same sphere as the commercial images that were circulating at the time.