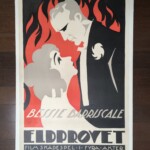 Eldprovet – Hearts Asleep (1919) 25.5″ x 35.75″ Swedish Art Deco Linocut Movie Poster LB Bessie Barriscale was a silent film and stage actress, and major star for producer Thomas Ince in the late 1910s. In 1918, Barriscale was contracted by B.B. Features and Robertson-Cole Company to make sixteen films. Hearts Asleep was one of those films, and it was directed by her husband Howard C. Hickman. This art deco inspired poster was created for the Swedish release of the film, and was produced using the Linocut printmaking technique, a variant of woodcut in which a sheet of linoleum (sometimes mounted on a wooden block) is used for the relief surface. A design is cut into the linoleum surface and the sheet is inked with a roller called a brayer, and then impressed onto paper. Although linoleum as a floor covering dates to the 1860s, the linocut printing technique was used first by the artists of Die Brücke in Germany between 1905 and 1913 where it had been similarly used for wallpaper printing. They initially described these prints as woodcuts, which sounded more respectable. Condition: VG Please refer to the attached image for a detailed view and condition of this original vintage poster. With AAA Vintage Posters your purchase is backed by our 100% Money Back Satisfaction Guarantee!