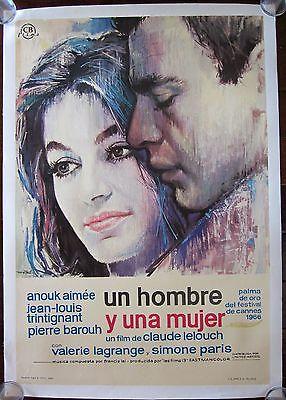 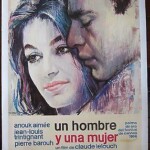 
“The motion picture to see again and again… See it with someone you love.”


Original and truly beautiful 1966 Vintage linen-backed Spanish One Sheet (27″ x 39″) for the Grand Prize Winner at the 1966 Cannes Film Festival, Claude Lelouch’s classic, A MAN AND A WOMAN, starring Anouk Aimee, who was nominated for a Best Actress Academy Award, Jean-Louis Trintignant, Pierre Barouh, Simone Paris, and Souad Amidou.  This original and strikingly sensual linen-backed Spanish One Sheet for A MAN AND A WOMAN, had corner pinholes, has light fold line touch ups, great color, strikingly romantic artwork and is overall in Fine to Very Fine Condition on linen.   Please refer to the attached image and enlarge for a detailed view of this remarkably romantic Spanish A MAN AND A WOMAN One Sheet on Linen.  We will be listing many posters this weekend so keep checking back for new additions.